Succeed as a Young Entrepreneur.

Work to Achieve Your Dream.

Speaking at the latest Amway Distributor Rally on May 6, new Diamond Direct Distributors Billy and Minnie shared from the perspective of a pair of post-90s leaders, examining how they equipped themselves for their future through the Amway platform. “Young people are able to explore their potential and enjoy unlimited development opportunities if they make the right choice,” was the clear message.

As a post-90s artist, Minnie was involved in design work and large-scale wall art before joining Amway. “I enjoyed my artist’s life before reaching the age of 18, but then I realized I needed to plan my life after I turned 18, and that this was the ‘real art’ of life,” she said.

Minnie’s artworks are usually based around similar themes – people, hope, love and peace – which coincide with the philosophy of Amway. “A career in art is not always stable, but I will devote myself to it wholeheartedly as long as I believe it is a worthwhile thing to do. I believe my effort will be appreciated if I work hard,” she said.

Billy shared that he was raised in an ordinary family and began to develop a passion for table tennis when he was 11 or 12. “My elder brother bought me a table tennis paddle as a present as he wanted me to create a breakthrough in the sport,” said Billy, adding that he believed he had to try new things if he wanted to know their true value.

He practised hard but didn’t win any table tennis competitions until he was 18. “It was difficult to create more breakthroughs after I began studying at university, so I decided I need to work even hard to pursue my goal.” The long-term training put considerable strain on his joints, “but then my brother introduced me to Amway’s health supplements and my physical condition began to improve significantly. In fact, I was delighted when I took second place in my next competition.”

Working for the Future

“I started to think about my future after that competition,” Billy recalled. “I began to appreciate the benefits of Amway’s quality products so I asked my brother if he would introduce me to the Amway business. I remember when I first met my upline leader I was asked what kind of person I wanted to be. This inspired me, because it was something I’d never thought about before.”

Seeing the outstanding achievements the young leader had made boosted Billy’s confidence in the business. “He had enabled Macau, a city of just 600,000 people, to extend its network to the international market. He was really a role model for me!”

Minnie added: “I wanted to have a backup plan in order to enjoy a more secure future. Amway was exactly what I was looking for – I felt blessed to find Amway because I saw how it enabled young people to broaden their horizons and build international experience.” The pair’s hard work and dedication has paid off, and they have now become role models for other young people. 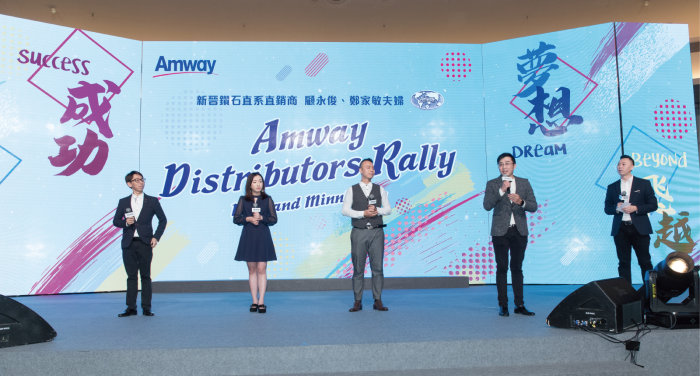 “We started Amway on our own but it has since expanded into a big team – and we could never succeed without the help of our team and partners,” Billy said, showing his gratitude. Amway celebrates 60 years of business this year, and the pair saw this as an invaluable opportunity to pursue their next goal in the business. “We aimed to become Diamond Direct Distributors this year and we wanted to set foot in Amway’s headquarters to personally experience the strength of the business.”

Billy and Minnie share a growth mindset along with a willingness to change, which are both very important in developing the Amway business. “Courage enables us to create breakthroughs; success can be achieved if you are bold enough to move beyond your boundaries,” Minnie said. “As part of the post-90s generation, we have to be the role models and highlight the capabilities of young people. We will never let our dreams fade.”

Dare to Dream. Dare to Challenge

Dare to Dream. Dare to Challenge

“The most beautiful vision in life is that we are able to see the future, which we believe will be even more fruitful if we work hard for the next five to 10 years. We really believe our business will continue to reach new heights!” Billy also shared his 100 dreams with the audience. “I’m determined to achieve them one by one!” he smiled, reminding everyone that he was in the audience himself just five years ago. “I’m able to be in the spotlight today thanks to our courage and determination,” he said.

“Young people should dare to dream and think about their future, enabling them to create unlimited possibilities,” Billy and Minnie stated, encouraging young people to go out and equip themselves for the future. “We hope to inspire you by sharing our stories and we look forward to sharing the joy of success with you together.”